Ten years ago the INWC had a vision of providing better hunting opportunities for disabled hunters, specifically those in wheelchairs.  A number of wheelchair platforms with ramps were built and soon deployed to several locations in the Colville National Forest (one on Brewer Mtn, and two on Betty Cr), One on Inland Empire Paper Company land (which somehow later was stolen!), while some were donated to the Boy Scouts, and one currently sits out on Vern Zieglers land and will soon return to the warehouse for maintenance and redeployment.  Finally, two additional sat out behind the warehouse as spares awaiting a location to be used. 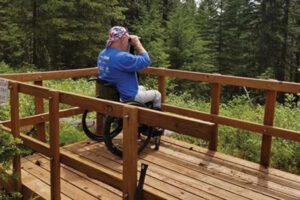 Today we stand on the shoulders of the men and women who worked to make that vision a reality.  Little did I know that when I signed on with this outfit at the BHS back in 2014, that I would someday become the chair of the Disabled Access Committee.  In the late winter of 2016, Larry Carey passed the baton to me, along with some sage advice on the who, what, where, and when of this committee.  So, here’s a short run down of what has happened since then …

With the three platforms that were already up in the Colville National Forest, and had been there for seven years at that time, I began making an annual trip up to inspect them for any needed maintenance.  Seeing as those three seemed to be faring well, our attention was now needed in making sure the Application process for the Inland Empire Paper Co disabled hunter program progressed as normal.  Jean and Wanda were a huge help in getting this done.

Somewhere along the way, having two spare platforms out behind the warehouse didn’t seem right to me.  Surely, there must be a place we could put these where they could be used.  I started asking questions at the WDFW office, and was given the contact info of Daro Palmer, Asst Mgr for the Sherman Creek Wildlife Area.  After trading some emails, and visiting the Rustler’s Gulch Unit of the WLA, he agreed to let us put one out there.  After Pete Butler and I scouted the area for the right location, we informed Mr. Palmer, and scheduled a work party.  And in October of 2018, Pete, Matt Mimnaugh, myself, and one of Daro’s field tech’s installed the wheelchair platform on the low side of Rustlers Gulch Wildlife Area just off of the Holly Rd.  We must have done a pretty good job, the following Spring we were invited to install one at the Sherman Creek Unit near Kettle Falls.  It was preparing this platform that I realized the existing ramps were not ADA approved.  We modified the ramps to meet the current spec, and with help from several members: and Daro Palmer, it was installed without a problem, and huckleberry shakes for everyone on the way home.  Within the next two months, we had modified the ramp at Rustler’s Gulch and Brewer Mtn, to include moving the Brewer Mtn platform outside of a timber sale area to a new location on the same mountain.

Then one year ago, after learning that a freshman at CVHS was looking for an Eagle Scout project, I reached out to him, shared the idea, then met with him and his father, who then agreed to move forward with the proposal.  When the project got the go ahead, we used funds from our committee budget to purchase the materials.  Member Jack O’Brien and I pre-cut all the materials on a Friday afternoon, and Saturday morning the Scouts showed up at the warehouse with two adult leaders, and after I shared some initial instructions and safety precautions, the boys got started, led by the Eagle Scout candidate.  The boys exercised incredible initiative, asked for clarification when in doubt, and left this old man very impressed that they had completely assembled the entire platform, ramp and handrails in just three hours.  Two weeks later, we loaded it on Daryl Bush’s truck, and he, Cody Bush, Ron Zubrick and myself led the way up to Squirrel Meadows with the scouts right behind us.  The same dedication to the task at hand that they showed me during assembly was once again demonstrated on site. 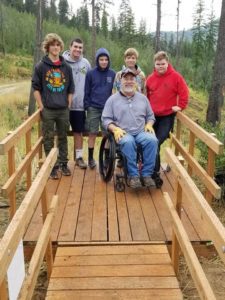 So what’s next?  We are currently in the process of removing the two platforms from Betty Creek which are in a Road Access Entry Program (RAEP) area and bringing them back to the warehouse for repairs and some fresh stain.  Since the RAEP on Betty Creek is a lottery draw, we have decided to relocate them to other areas within the Colville National Forests Disabled Hunting Program.  The platform on Brewer Mtn is already a part of this program, as is the one installed at Squirrel Meadows.  Aladdin Mtn is also part of the program but does not have a platform as of yet. 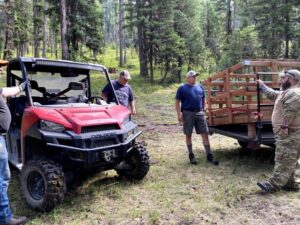 We have also received confirmation this week from WDFW’s ADA Advisory Council, through our own Ron Zubrick, who is an ADAAC member, that they will be providing the funding for us to build two brand new platforms.  Along with the two from Betty Creek that will be updated soon, those four platforms will find new homes at Aladdin Mtn (2 ea), Rustler’s Gulch (1 more), and Blanchard Hump.

As you know, the Hancock Paper Company has provided two parcels to us for disabled hunting: Little Sweden and Huckleberry – both within GMU 121.  Access to the Little Sweden parcel has been difficult the past few years.  As we have jumped through all the hoops to get permission to install a platform on Hancock property, we were able to work out an agreement with them that if they would allow us access to one of their tracts at Blanchard Hump, then we would surrender Little Sweden from the program.   I will be scouting that area with a WDFW private lands biologist soon, and by the time you read this newsletter, it will have already been scouted, and a suitable location flagged for platform installation very soon.

Of course none of this would be even remotely possible without the continued support of all of you, and the hard working volunteers that have helped so much the past few years: Matt Mimnaugh, Pete Butler, David Chromy, Jack O’Brien, Phil George, Rich Furry, Ken Hoff, Jason Neumiller, Z Zubrick, Daryl and Cody Bush, (I’m sure I’ve forgotten a name or two) and a few non-members.

With the needed repairs to be done on two platforms, and building of two new ones – any help is appreciated.  While we still have to remember the current COVID restrictions, work parties of five or less are still approved.  If interested in assisting, please contact me.  I will add you to an email list created just for Disabled Access.  Your continued support, and sore backs are greatly appreciated.

The vision to birth this program along with the tireless dedication and passion to see access and opportunity for all disbaled sportsmen will continue to move forward … with people like you!

One reply on “Providing Access and Opportunity for all Disabled Sportsmen”